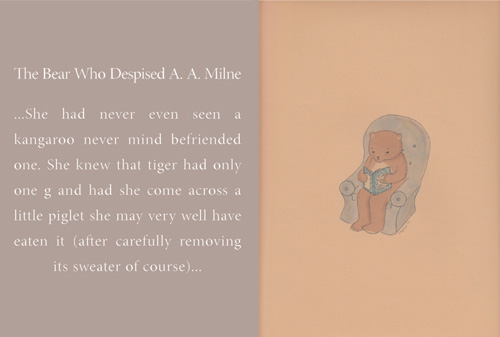 Storytime is an exciting new collaborative multi-media installation by Winnipeg artists Glen Johnson and Leslie Supnet which will be shown in Gallery 1C03. In total, this project has four distinct components: 1) an exhibition that pairs Supnet’s drawings alongside Johnson’s stories and a short animated film by Supnet which is narrated by Johnson; 2) an accompanying full-colour illustrated publication containing the drawings/stories with a critical essay on the project by Winnipeg-based writer Tom Kohut [pending funding]; 3) two public performances by Johnson; 4) a public artist talk by Supnet.

Storytime represents the very first collaboration between Supnet, a visual artist and animator, and Johnson, a writer and performance artist. The pieces presented in this exhibition are entirely new. As the two artists became acquainted with one another’s work over the last few years, they realized that they share a certain overlapping sensibility. Both artists are interested in the tradition of illustrated stories and are drawn to a certain kind of anthropomorphism in their work, perhaps best exemplified by the work of Beatrix Potter or Thornton W. Burgess and Harrison Cady. Emphasizing the collaborative nature of their work from conception, neither of the artists wanted the project to be solely a matter of Supnet illustrating Johnson’s stories. Supnet began to work on drawings that were inspired by existing stories but she also gave sketches to Johnson for which he subsequently wrote new stories. A story might inspire a drawing that necessitated rewriting the story or a drawing that inspired a story might have to be altered to fit the new story. By continuing this back and forth process over a lengthy period of time the two will produce a body of richly layered drawing and story pairs.

The exhibition in Gallery 1C03 will include a selection of 15 – 20 of these paired drawings and stories, each presented in the format of a bound hardcover children’s book. The books will be placed on small low tables, encircled with chairs. These furniture groupings, spread throughout the front two-thirds of the gallery, will resemble the reading area of a bookstore, library or classroom. This installation will allow gallery visitors to sit at the tables and handle the “books,” thus engaging with the works as they would illustrated children’s books.

Two to three new short animated films, collaboratively created by Johnson and Supnet, will be presented as part of an installation in the back third of Gallery 1C03. The films will be screened on what will appear as an old style cabinet television. In order to ensure image and sound quality, however, the screen will actually be a flat panel monitor mounted inside an old tv cabinet. The television will be placed within a small living room setting. There, seated on a vintage-style couch, gallery visitors will be able to watch the short films as they would have watched cartoons in their childhood homes. In addition to the living room area with the television, there will be an oversized chair with an end table and a lamp to serve as the setting for Johnson’s performative story readings.

Johnson’s performances will be part of his ongoing “Uncle Glennie” story reading practice. Begun at Gallery 803 in 2006, the series attempts to replicate the experience of a children’s story time with Johnson reading selections from his storybook. While Johnson’s readings are modeled on children’s story times, the character of his stories is by no means juvenile. Although the stories are rarely overtly adult or inappropriate in tone or content, the themes and the manner in which these themes are handled are not tailored for young audiences. When “Uncle Glennie” is not performing, his book of stories will be left on the table by his chair for visitors to peruse.

Supnet’s drawings and short animated films, like Johnson’s stories and readings, appear child-friendly on the surface but they often deal with dark subject matter in a subtle and adult-oriented way. In her words, the images reference “identity, isolation, longing and despair, all with a touch of whimsy and the surreal.” She is interested in using her drawing “as a mechanism to cope with the little tragedies we all face day to day.” Each work possesses a strong and instantly recognizable sentiment, including her distinct brand of melancholy and an edge of irony. She hopes to “invoke a sense of childhood wonder, and inspire playfulness in the lives of the viewers.”

Storytime has been planned to open in early September during the University’s first week of classes and Student Orientation Week. The exhibition will be promoted as part of O-Week, with the first of Johnson’s performances taking place in partnership with these celebrations and sponsored by the University’s Student Association.

Significantly, Johnson and Supnet are University of Winnipeg alumni and their exhibition will also open as part of the University’s 2012 Homecoming celebrations.

Johnson’s second performance will take place as part of Culture Days, again allowing new audiences to be exposed to both contemporary performance as well as Gallery 1C03’s programming. His performance will be recorded and an audio podcast of it will be posted on the gallery’s website and blog for those who were unable to attend the event in person.

Vladimir Nabokov and the Poetics of the Child

Writing Through Race Panel at University of Winnipeg