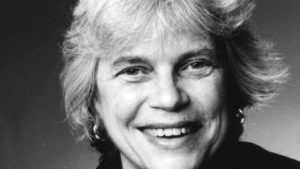 The sudden death of Elisabeth Young-Bruehl on December 1, 2011 at age 65 near her home in Toronto has saddened us all immensely. Young-Bruehl wrote fifteen books, and her work as a biographer and psychoanalyst has been enormously influential, touching many lives and shaping the disciplines she worked in. In January 2012 her long-awaited book Childism: Confronting Prejudice Against Children was published.

This December 1, we will honour this great work while remembering Elisabeth with the help of four accomplished panelists: Alison Bechdel, Raffi Cavoukian, Donna Orange, and Dr. Heather Weir.

Alison Bechdel is the author of the bestselling graphic memoir Fun Home: A Family Tragicomic, which won a 2007 Eisner Award, and Are You My Mother?: A Comic Drama, which came out in May to critical acclaim. From 1983 to 2008, she drew the comic strip “Dykes to Watch Out For,” which has been collected in several volumes, including The Essential Dykes to Watch Out For.

Raffi Cavoukian is known to millions simply as Raffi: a renowned Canadian songwriter and performer, author and entrepreneur, once called “the most popular children’s entertainer in the western world” (Washington Post). In 1997, Raffi was inspired to develop a holistic philosophy called Child Honouring. The philosophy is outlined in the book Child Honouring: How to Turn This World Around edited by Raffi Cavoukian and psychoanalyst Sharna Olfman, 2006 with a foreword by the Dalai Lama.

Donna Orange is educated in both philosophy and clinical psychology. She also teaches at ISIPS (Institute for Psychoanalytic Psychology of the Self and Relational Psychoanalysis), Milano and Roma. In New York, she teaches and supervises at IPSS, the Institute for the Psychoanalytic Study of Subjectivity. She is author of Emotional Understanding: Studies in Psychoanalytic Psychology; Thinking for Clinicians: Philosophical Resources for Contemporary Psychoanalysis and the Humanistic Psychotherapies, and The Suffering Stranger: Hermeneutics for Everyday Clinical Practice as well as coauthoring numerous other books.

Mavis Reimer at Panel Discussion for Chris Reid: I like to believe I am telling the truth