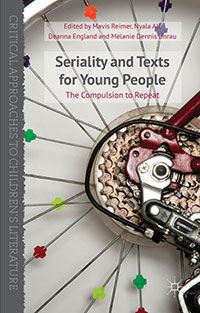 Seriality and Texts for Young People is a collection of thirteen original, scholarly essays about series and serial texts directed to children and youth. Each begins from the premise that a basic principle of seriality is repetition and explores what that means for a range of primary texts, including popular narrative series for children, comics, magazines, TV series, and digital texts. Contributors featured include internationally-recognised scholars such as Perry Nodelman, Margaret Mackey and Laurie Langbauer, and the essays cover texts such as the Harry Potter novels, Buffy the Vampire Slayer and Anne of Green Gables. The introduction provides a framework for the detailed explorations, reviewing some of the most important contemporary theories of repetition, pointing to some key criticism on series, and speculating on the significance of the series form for the field of young people’s texts.

1. Off to See the Wizard Again and Again; Laurie Langbauer

6. “But what is his country?”: Producing Australian Identity through Repetition in the Victorian School Paper, 1896-1918; Michelle J. Smith

8. “I will not / be haunted / by myself!”: Originality, Derivation, and the Hauntology of the Superhero Comic; Brandon Christopher

10. The Beloved That Does Not Bite: Genre, Myth, and Repetition in Buffy the Vampire Slayer; Debra Dudek

11. Roy and the Wimp: The Nature of an Aesthetic of Unfinish; Margaret Mackey

What Do We Tell the Children?: Immigration, Race, and Historical Trauma in Canadian Children’s Literature